How to Make Moonshine - A Dive into Midnight Moon’s Moonshine

How to Make Moonshine – A Dive into Midnight Moon’s Moonshine How do you make moonshine? This popular question comes with an interesting answer, and Midnight Moon explains the ins and outs of their process. Between the use of Midnight Moon’s state-of-the-art facility and moonshine’s history in general, you’ll learn everything you need to know about how to make moonshine.

Midnight Moon leans heavily on moonshine tradition but adds a modern take that will have your tastebuds thanking you. Because Midnight Moon takes a traditional recipe from the 18th century and marries it with 21st century technology, you won’t find a higher quality ‘shine anywhere else.

We pride ourselves on the fact that we take the extra time and spare no expense to make Midnight Moon the absolute best it can be. Since we were the first legal distillery in North Carolina over 17 years ago, we like to say the Midnight Moon team has been hand-crafting spirits before “craft” became cool.

Moonshine often has a negative connotation associated with it, as its history is riddled with conflict, crime and shady characters. Despite its colorful past, moonshine has something that all liquor needed – Spirit. It has thrived at times, survived at others and now has established a permanent place in the world of spirits.

A common pattern throughout its history is the resurgence of its popularity during times of certain government decrees. After the Revolutionary War, the U.S. government taxed alcohol to pay war debts; those who wished to eschew those taxes were the basis of the black market behind moonshine.

As times changed, so did moonshine’s demand. Thomas Jefferson repealed the act that taxed alcohol, letting spirits run freely through the country again. However, Prohibition in the 1920s brought about another resurgence of this forbidden spirit’s popularity, since ignoring government decrees was what moonshiners did best.

Moonshine has served two great purposes in American history: undetected alcohol consumption and an alternative use of corn for farmers. With moonshiners earning their name by distilling under the light of the moon, it is no surprise this elixir became everyone’s preference as Americans avoided paying the higher prices for legal alcohol driven by the government taxes and during Prohibition. On the flip side, farmers found use for the excess corn they could not sell, transforming it into their own kind of liquid gold. Everyone but the government won.

Once Prohibition ended in 1933, moonshine once again retreated, unnecessary in a time of alcohol abundance. However, moonshine never died, and has since become a respectable spirit in the United States. In fact, it is gaining popularity due to consumer interest in discovering unique experiences and a desire for hand-crafted spirits.

Before we dive into how moonshine used to be made, let’s take a quick pause to catch you up on some old-school ‘shine lingo:

The moonshine-making process and equipment used in the 18th century was quite different from the legal setup you see today. In order to stay out of reach of the revenuers, moonshiners typically set up operations deep in the Appalachian mountains; as a result, making ‘shine was extremely hard work typically took place in less than ideal weather conditions.

They had to build the still and then haul large quantities of corn across rough terrain, down into the holler; this gave moonshiners access to the springs and streams needed to make the mash and run the still. It is important to note that Mother Nature and her furry friends often presented challenges to making moonshine in the middle of the woods.

Working their craft under the risk of being raided by the revenuers, moonshiners wanted to get as much alcohol out of each batch and run each batch as quickly as possible. As such, it became popular to make “sugar liquor.” This practice added sugar to the mash-bill in order to increase the amount of alcohol produced from the mash. However, replacing corn or adding sugar to the mash did have its trade-offs: it produced a harsher, “burnt” taste compared to the subtly sweet flavor associated with high quality moonshine distilled from 100% corn.

Consistent with their desire to make as much moonshine from each distilling run, the Double Thumper Still was the most popular still design. It employs a Pot Still, Thumpkeg and Condenser. The tails, or low-proof alcohol left over from a prior run, are placed in the Thumpkeg. The alcohol vapor made from the fresh mash in the Pot Still comes over to the Thumpkeg, turns back into liquid and then is slowly heated until it turns back into vapor, where it goes over to the coil – traditionally referred to as a “worm” – and is chilled; it then turns back into a liquid. Some refer to this process as a double distillation, which leads to getting more alcohol out of the batch and creating a higher-proof ‘shine.

Moving back to today and how Midnight Moon makes its moonshine, Midnight Moon enlisted the expertise of legendary moonshiner and NASCAR inaugural Hall of Famer, Junior Johnson, during the development of its ‘shine. The Johnsons built a reputation as purveyors of the best damn moonshine you could buy by using a 100% corn mash-bill (no sugar added), Double Thumper stills to make the ‘shine as pure as possible, and their expertise in knowing where to cut the head, heart and tails of each run.

In contrast to the tradition of making moonshine in the middle of the woods, Midnight Moon has a state-of-the-art facility located in the small town of Madison, nestled at the foothills of the Blue Ridge mountains in western North Carolina. Here, Midnight Moon legally produces its fine moonshine and operates with the full approval and permits from local, state and Federal governments. No more hiding from the revenuers…

Midnight Moon’s moonshine is born from the Johnson family recipe, using a 100% corn-based mash-bill. The mash is then quadruple-distilled (four-times) in a modern, state-of-art column still. This combination of tradition and technology creates the highest quality, purest moonshine, with the subtle sweetness that made Junior’s moonshine famous. Once distilled, the ‘shine is taken to proof with water sourced from the Blue Mountains. The water is “polished” and made ultra-pure by running it through a 5-step filtration system.

Additionally, all of our Midnight Moon moonshine flavors, ranging from dill pickle to apple pie moonshine, follow the tradition of using all-natural, real ingredients. Many flavors include hand-packed, Grade A, real fruit in the jar. Our focus on this spirit’s traditions and all-natural ingredients creates a family of incredible Midnight Moon flavors that taste just like Junior and Mother Nature intended!

And we don’t stop there – be sure to check out our moonshine cocktails, with fun drinks made from our apple pie moonshine recipes. No matter which moonshine drink you dream up, we have the ‘shine for you to have a good time.

Though some of you may want to know how to make moonshine at home, Midnight Moon carries on the Johnson tradition of using only the best ingredients, equipment and Junior’s expertise in hand-crafting the best damn moonshine you can buy. So, don’t bother accidentally breaking the law by making your own – order any Midnight Moon moonshine flavor you want with a simple click. 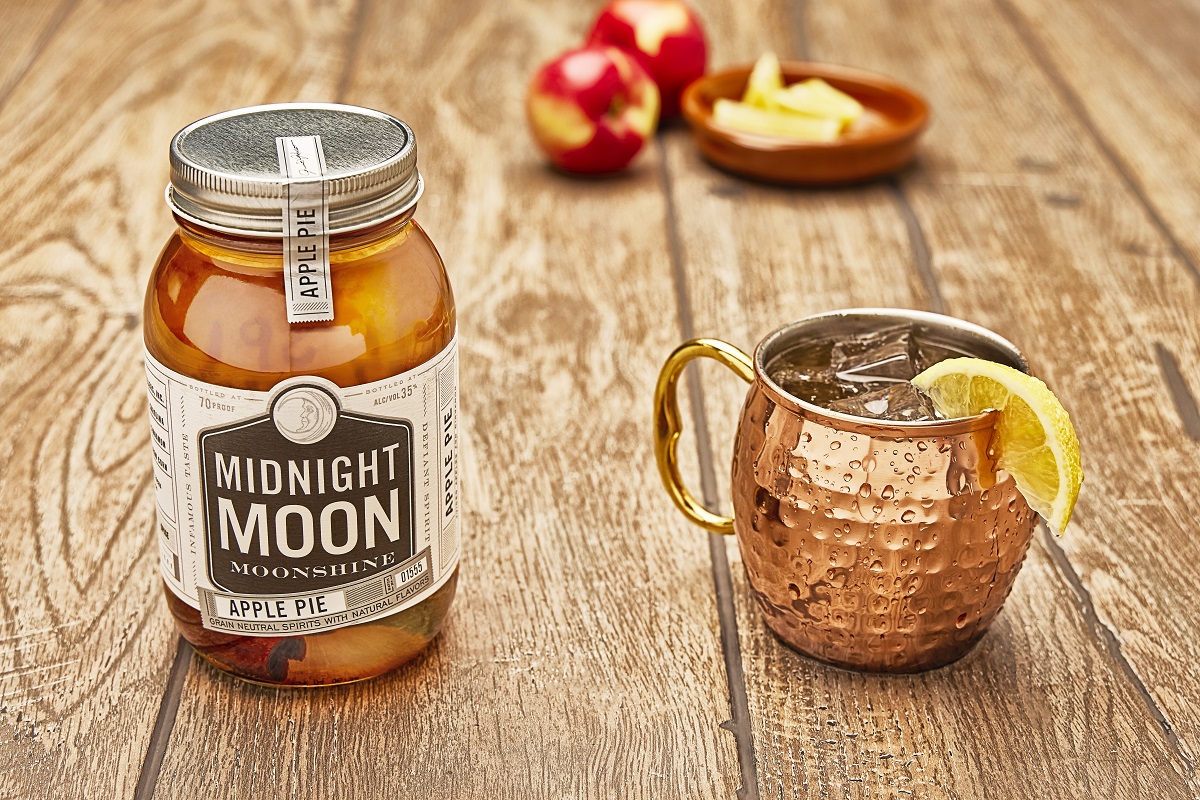